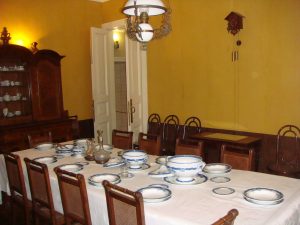 House-museum of Lev Tolstoy (1828 – 1910) is one of a few wooden Moscow estates that have survived through the fire of 1812. Together with a peaceful garden and back-houses it is an oasis of the early 19th century Moscow.

The writer with his family lived here in winters and autumns for 19 years since 1882. There are more then 5000 possessions of the Tolstoy’s on display. In Tolstoy’s personal study there is his desk where about one hundred of his famous works were created at. Among them there were the novel “Resurrection”, the story “The Death of Ivan Ilyich”, “The Kreutzer Sonata“, “Father Sergius“.

In several aspects it is an authentic part of Moscow well preserved in its holistic state.
The estate we converted to be a museum since 1921.

View from the backyard.