Visiting old Arbat street – 1,3 kilometer of Moscow – could be a comfortable final stop of the City Tour or a destination itself  for a short (1 hour) stroll along the first pedestrian street of Moscow.

Arbat street is a part of what used to be the 15th century suburban district, the 17th century artisans’ district and the late 18th century most aristocratic area of the city. Since the early 19th century Arbat was often described as the “St Germaine” of Moscow. Traces of that times left in the memorial museums of Russian intellectuals that used to live in here. Among them there were Alexander Pushkin, Sergei Scriabin, Melnikov’s House, Andrei Belyi, Bulat Okudzhava.

Muscovites used to say: “For money go to Zamoskvorechie, for a career go to St Petersburg, for knowledge and memories – to Arbat”.

Today Arbat street is mostly a souvenir shopping area in the down town of Moscow. Nevertheless there are many charming lanes and some old houses and churches along with quite a bunch of cafes. 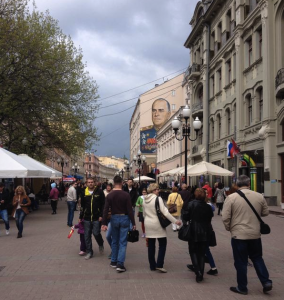