Borovsk and the Nativity of Our Lady Monastery of St Pafnuty

Welcome to experience Moscow region – the small provincial town of Borovsk in 90 km to the southwest from Moscow (7-8 hours tour).
It could be reached by public transport (Metro + commuter train + local taxi) or by car – be ready to spend 2 – 2,5 hours just to get there.

By commuter train (1 hour 20 min) we arrive to “Nara” train station and take a local taxi cab for 35 km drive to Bororvsk central square named after Lenin with Trading Rows of the late 18th – early 19th centuries, monument to Lenin, numerous murals on the walls of the down-town houses and ordinary provincial life of the locals.

By car we proceed directly to Borovsk (2-2,5 hours depending on the traffic along Kievskoe higway).

The Nativity of Our Lady Monastery of St Pafnuty of Borovsk founded in 1444 is an operating monastery today. As one of the most venerated cloisters in Kaluga district (Moscow region) it has life history deeply connected with the history of Russia. It was ruined twice – in the Time of Troubles (early 17th century war period between two ruling dynasties of Russia) and in Napoleonic invasion of 1812. In 1919 it was nationalized by the Bolsheviks government and in 1942 was temporarily used as the headquarters for Political Affairs of the Western Front. In 1991 the cloister was returned back to the church and monastery life started to be revived. 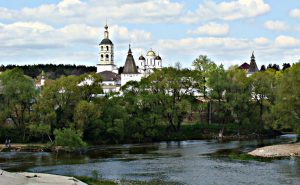 Photos of the monastery are made by Vladimir Postoev

Next destination where we might go by the taxi is the Ethnographic park-museum of traditional wooden houses of different nationalities of Russia. It is in 9 km (15-20 min driving) from Borovsk. 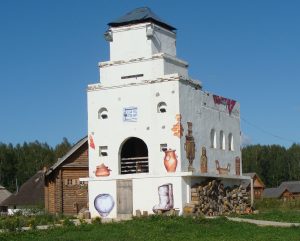 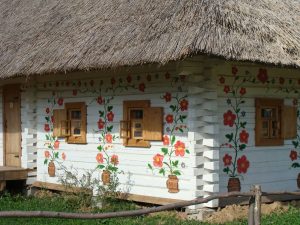